Tenerife has an unrivalled natural offer. In barely 2,000 km2 it offers a magnificent variety of climate and vegetation, beaches and mountains and even World Heritage Cities. During your visit to the island to enjoy golfing we advise you to take advantage of some of the best corners of the island, regardless of the area where you are staying, as the distances by car are quite short. 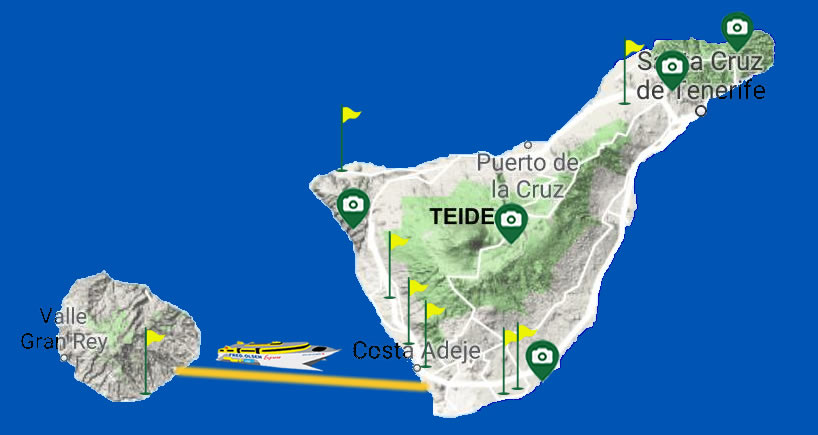 Below we offer you a brief summary of some of what we consider to be the five best places of interest on Tenerife island, and some tips to enjoy them as much as possible.

Cliffs of the Giants

The cliffs of the Giants represent a volcanic geological accident on the west coast of the island of Tenerife, characterized by its vertical walls, which fall into the ocean from heights that can reach 600 meters. These impressive vertical rock walls extend from the Port of Los Gigantes to Punta de Teno, the westernmost tip of the island. The best way to see these cliffs up close is on board one of the many boats that operate from the Los Gigantes dock, which often includes watching the bottlenose dolphins and pilot whales that populate these waters. These excursions also often include anchoring time on Masca beach, to enjoy a swim and lunch in truly idyllic surroundings.

It is also highly recommended to visit the village of Masca, located at the top of the cliffs, and stop to have a drink in the village and enjoy the magnificent views and the tranquility of the place. The cliffs end (or start) at Punta de Teno, the most north-western point of the island of Tenerife, from where you can see spectacular views of the cliffs, located very close to the Buenavista Golf course.

This is without a doubt the most important and must-see place on your trip to Tenerife. Declared a World Heritage Site by UNESCO in 2007, it is located in the center of the island, at an average altitude of 2,000 meters, and its summit, located on the Teide volcano, represents the highest peak in Spain, at 3,718 meters. It was declared a national park in 1954 and is the largest and oldest of the Canary Islands' national parks and the third oldest in Spain. Its extraordinary landscape is one of the most spectacular geological monuments in the world, in which volcanic cones and lava flows form an extraordinary set of colours and shapes. Its great biological richness cannot be forgotten. In the Teide National Park there are a total of 194 higher plants, of which 58 are considered endemic Canarian plants, among which the spectacular red tajinaste stands out.

Climbing the Teide volcano at 3,718 meters of altitude is an unforgettable experience. From the highest point of the island of Tenerife you can enjoy impressive views of Las Cañadas, the volcano next to Teide Pico Viejo and, on days with high visibility, the other six Canary Islands.

The climb to Teide can be done by a cable car that starts at the base of the mountain and in eight minutes reaches a point somewhat below the summit. It is also possible to climb on foot along a six-hour trail that starts at the Blanca mountain. In both cases you must carry a permit to access the peak if you want to complete the ascent, and you can sleep in the Altavista refuge to see the beautiful sunrise from the heights. To climb the cable car and see the fabulous views of the island from there, no such permit is required.

Anaga Rural Park is a protected natural area located in the Anaga Massif. It was declared a Biosphere Reserve on June 9, 2015 and is the place with the largest number of endemic species in Europe. The best way to know and enjoy this area of the island is on foot through one of its many trails (some of which require prior permission), although a visit by car with plenty of stops to observe the landscape and vegetation from the many viewpoints along the way, will delight anyone who visits this wonderful area of the island of Tenerife. It is advisable to stop at the Visitors Centre, where you will be given information about the Park and the routes you can take depending on the time you wish to spend. They also provide information on closed routes, specially protected areas with regulated access, and all kinds of useful tips.

The action of wind and rain over the years has left a very unique orography with thick vegetation and deep ravines that flow into the sea, giving rise to a multitude of beaches of great uniqueness and beauty, including Benijo, at the end of one of the few roads that run through the park, and from which besides enjoying a swim in a unique environment, you will have the opportunity to enjoy a spectacular panoramic view of the Anaga rocks, two of the most emblematic natural monuments of Tenerife.

The city of San Cristobal de La Laguna, popularly known as La Laguna, is located 545 m above sea level and is the second most populous city of Tenerife and the third of the Canary Islands. It was declared a World Heritage Site by UNESCO in 1999 for being a unique example of a colonial city not walled. In its streets there are new buildings, but also many that are even centuries old, with a very characteristic colonial air and with a lot of atmosphere almost at any time of the day and throughout the year. The city is only 10 minutes away from the Real Club de Golf de Tenerife, making it an ideal destination to visit after playing the course.

Apart from walking around the historical centre and having a drink in one of its many terraces, the Cathedral and the Church of the Conception are not to be missed. The former is a neo-Gothic cathedral in its main body and neoclassical on the façade (inspired by Pamplona Cathedral), and here lie the remains of Alonso Fernández de Lugo, conqueror of the island and founder of the city, called "El Adelantado", a title granted to him by the Spanish Crown. It is the only cathedral in Spain (and one of the few in the world) built with concrete and polypropylene fibres. The church of the Conception was founded in 1511 and is the mother parish of the island of Tenerife, as all the others came from it. The church is located in what used to be the Villa de Arriba, where, among others, the craftsmen's guilds lived and where the Baroque and Tuscan styles predominate.

La Tejita beach is located in El Médano, in Granadilla de Abona, next to the volcanic cone of Montaña Roja and very close to the fields of Amarilla Golf and Golf del Sur. The area is classified as a protected natural area, "Special Natural Reserve of Montaña Roja", and is one of the best examples of inorganic sand habitats on the island where wetlands are also represented. The beach is approximately one kilometre long, and is usually quite windy and has strong currents, so it is preferable to enjoy swimming without going too far from the shore to avoid scares. Nudism is allowed on the beach, although those who practice it are usually located in a small cove at the foot of Red Mountain.

The nearby El Médano beach is known worldwide for windsurfing and kitsurfing. In La Tejita you can occasionally see people practicing these activities, although it is normal that they practice the first one, with better conditions for the practice of both sports. If you prefer quieter beaches, it is better to visit those in the west of the island, such as Las Vistas or Fañabé in Costa Adeje, with little wind and waves, although it is advisable to go for a pleasant walk along the shore in this beautiful spot on the island of Tenerife.